Infections May Trigger Diabetes in Children and Young Adults

Researchers from the universities of Newcastle and Leeds Scientists analysed 25-years’ worth of data on more than 4,000 young people in Yorkshire with type 1 diabetes. 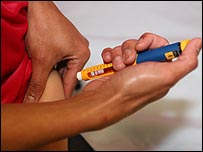 This pattern, “space-time clustering”, is typical of conditions triggered by infections. Conditions caused by more constant environmental factors produce clusters of cases in one place over a much longer time.

The results, published in Diabetologia, should help towards understanding more about the causes of Type 1 diabetes.

Simon O’Neill, the director of care and policy at Diabetes UK, said: “This research reinforces the idea that common infections and environmental factors also play a part.”

A quarter of a million people in the UK have Type 1 diabetes, which develops if the body cannot produce insulin. It usually appears before the age of 40.

June 19th, 2009 WASHINGTON - Young adults who have low aerobic fitness levels are two to three times more likely to develop diabetes in middle age, finds a new study. "These young adults are setting the stage for chronic disease in middle age by not being physically active and fit," said Mercedes Carnethon, lead author and assistant professor of preventive medicine at Northwestern's Feinberg School.

July 9th, 2008 University of Michigan scientists have found that the childhood obesity can lead to the epidemic of type 2 diabetes among young adults. Type 2 diabetes in turn can lead to greater number of diabetes complications, and ultimately, lower life expectancy.

Type 1 Diabetes Can Be Treated With Cord Blood Transplantation

June 21st, 2009 WASHINGTON - Men and women between 18 and 30 years with low aerobic fitness levels are more likely to develop diabetes in 20 years, a study said. Study lead author Mercedes Carnethon from Northwestern University said: "These young adults are setting the stage for chronic disease in middle age by not being physically active and fit." "People who have low fitness in their late teens and 20's tend to stay the same later in life or even get worse.

Monogenic Diabetes, the Biggest Cause Of Diabetes In Children & Young Adults

May 16th, 2008 Monogenic Diabetes are caused when one or more mutation occurs in a single gene. This type of mutations are very rare but has a great impact and lead to diabetes, at early stage.

January 4th, 2009 TORONTO - Diabetes dulls adult patients' mental functioning early during the onset and persists into old age, according to new research. Given the sharp rise in the incidence of diabetes, more adults may soon be living with mild but lasting deficits in their thought processes.

June 23rd, 2008 Diabetes UK, the largest organization for diabetics in England, has reported that increasing number of children are being admitted into hospital because of diabetes. It reports that more than 3,300 children in England were admitted into the accident and emergency departments for diabetes between April 2006 and March 2007.